The importance of keeping cool when feeding TMR

A total mixed ration (TMR) is a blend of silage, grains, other feed by-products, concentrates, and minerals; everything a cow needs for optimal milk production. It is consistent in its composition and is fed to cows at least once a day, making it an efficient way of delivering nutrients to the dairy herd.

For optimal milk production, the TMR must be mixed using the highest quality ingredients to a precise formulation based on the performance of the cows so that a deficiency or excess of nutrients is avoided. Providing a TMR which is deficient in nutrients will have a negative impact on milk production and herd performance. And with feed costs constantly rising, providing a TMR with excess nutrients is expensive and will lead to wastage.

TMR – the perfect breeding ground for microorganisms
When all the elements of the diet are mixed together in the TMR, the cow will receive a balanced diet with each bite. This maintains feed intake at a consistent level. Cows can be very fussy eaters and will often sort through their feed to eat only the elements they prefer. With a TMR, sorting is not as easy so there is less waste, and a more balanced diet is delivered.

But unfortunately, a TMR provides the perfect breeding ground for unwanted microorganisms. And with a high number of ingredients added to a TMR, the number of potential sources of contamination is also high. Ensuring the mixer is cleaned between each batch helps to reduce the risk of recontamination.

Once exposed to the air, the nutrient-dense and moist TMR provides microorganisms such as molds, yeasts, and bacteria the perfect environment for growth, especially in hot countries or during the warmer temperatures of the summer months. As the microorganisms grow, the nutritive value of the feed will reduce, and the unwanted fermentation will cause the palatability of the feed to decrease, eventually leading to feed refusals.

Figure 1. The cycle of increasing temperature in a TMR 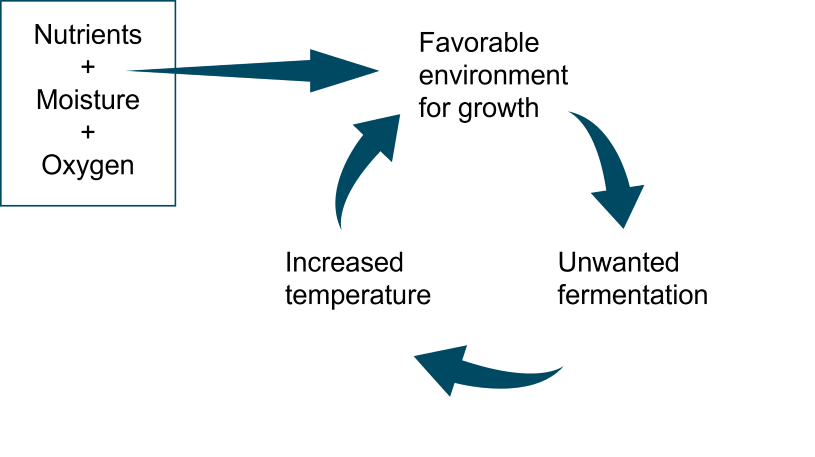 This cycle will cause the temperature of the TMR to rise quickly, especially in environments where the ambient temperature is high, to begin with. With increasing heat and fermentation, the nutritional value of many components of the diet will reduce, including the important carbohydrate and protein portions. In addition, the by-products of fermentation such as ethanol and ammonia will reduce the palatability of the ration. This will lead to increased sorting, reduced overall feed intake, and therefore decreased performance and milk production.

How clean is your feed?