Aquatic August: the rise of the underdog animal protein

The industrial development of aquaculture industry is quite recent and fast. Did you know that the consumption of fish in the world grows continuously every year? According to the FAO, it reached 20.5 kg per capita, which represents more than 15% of animal protein global consumption, and it is expected to reach 21.5 kg by 2030. Global fish production is estimated at about 179 million tons. Of that roughly 156 million tons ended up on our plates.

The consumption and production of aquatic animal protein sources is very unevenly distributed. In Asia and Oceania over 24 kg is consumed per capita. In terms of production the statistics are even more skewed. China alone accounts for 60% of the world’s production, while Asia as a whole makes up more than 85%. Currently, the fastest growth occurs in emerging countries not only in this region but also in Africa and Central and South America.

Fish farming vs. wild capture
All of this may have you worried about ocean life. Fortunately marine species are increasingly protected. According to the FAO, 78.7% of aquaculture already comes from biologically sustainable populations and this proportion is expected to continue increasing in the coming years. As a matter of fact the amount of wild capture has only grown with 14% since 1990. By far most of the increased demand has been solved by industrialized aquaculture. That industry has grown 527% (!) in the same period. The efforts of this industry globally are paying off. This is good news for the environment but for us as consumers as well, since fish and fishery products are considered among the healthiest foods with the least impact on the environment. 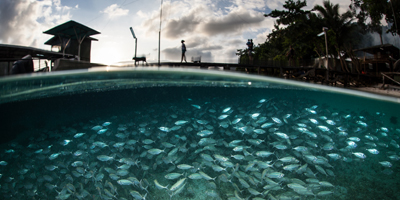 Our role to play
Perstorp offers feed additives that can help aquaculture professionals to improve the growth rate and feed conversion of several species. Want to know more? Contact us if you’re interested in hearing more about the solutions we can offer for aquaculture >>