Optimizing the dietary electrolyte balance (dEB) is a well-established method to maintain animal health and production during periods of heat stress. Additives that contain sodium are go-to solutions to optimize the dEB. But are you choosing the right one for your purposes? You may be able to book some quick gains by switching sodium source. Let’s have a look at the most common additives and how they stack up.

The processes behind heat stress
To thermo-regulate during heat stress the animal starts panting to increase the evaporation and thereby reduce body temperature. The panting causes a respiratory alkalosis, a relative increase in bicarbonate ions compared to hydrogen ions in the blood, resulting in a rise of blood pH. Even minor changes in blood pH cause production loss or even death, therefore the acid-base balance needs to be restored fast. Since the heat remains, the breathing pattern will continue, so the relative excess of bicarbonate ions needs to be reduced via the kidneys by preserving hydrogen ions and excreting bicarbonate ions. Sodium plays a key role in these two processes. 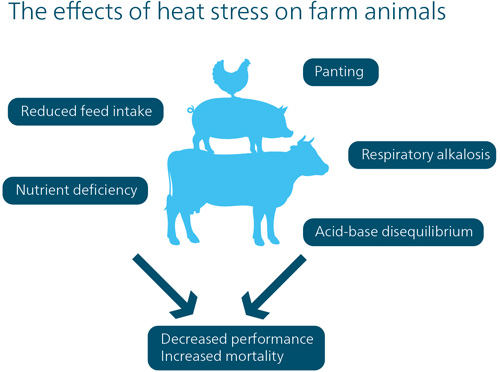 The power of electrolytes
Electrolytes have some especially important physiological functions in the body. Firstly, they regulate the retention and movement of water in the body, controlling the osmotic pressure. Secondly, electrolytes are highly involved in regulating the acid-base balance, blood pH. This is important during normal circumstances but becomes critical during heat stress.

dEB optimization
A solution to manage the acid-base balance in the blood is to optimize the dietary electrolyte balance to 240 mEq/kg feed. That will give the animal a head start to withstand the physiological consequences of the heat stress.
When choosing the feed additive for dEB optimization there are some things to consider, such as:
• dEB increase per kg product
• Interference with other raw materials
• Price
• Total feed cost

Evaluating sodium sources
Not all sodium sources provide equal contribution to the dietary electrolyte balance. Let’s review the most common ones:

Are you adding antacids to your feed?
Sodium bicarbonate offers no additional benefits to the animal other than the sodium it provides. Sodium bicarbonate has a high buffering capacity and thereby neutralizes acids, turning them into water and carbon dioxide. As a buffer, sodium bicarbonate effectively neutralizes gastric acid and that is why it is used in humans as an antacid. It increases the gastric pH to relieve heat burn and upset stomach. In animal nutrition, especially in diet for young animals with immature gastro intestinal tracts, nutritionists work hard to reduce the buffering effect of the diet. They spend a substantial amount of money on ingredients and feed additives with low buffering capacity such as acidifiers and synthetic amino acids to improve the digestibility of the diet and to prevent growth of harmful bacteria in the gastro intestinal tract. 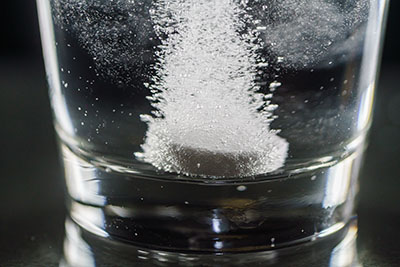 Sodium bicarbonate effectively neutralizes gastric acid. That is why it is available in many antacids at your local drug store. It increases the gastric pH to relieve heat burn and upset stomach.

Sodium formate to enhance dEB
Sodium formate is a good tool to manage dEB since it provides 20 % more sodium than sodium bicarbonate and a higher dEB increase per kg of product.
Except for sodium, sodium formate also provides formate to the diet which in a solution (crop or stomach) will be converted into formic acid, effectively increasing formic acid content, fig 2. Additionally it is well recognized that formic acid and its salts have a bacteriostatic effect on pathogenic bacteria, such as Salmonella and E. coli. As such, the passage of harmful bacteria into the small intestine is reduced. This effect along with improved feed nutrient absorption leads to an improved gut health and less chance of pathogenic bacterial growth.

As one of the main producers of sodium formate, the Swedish company Perstorp offers a sodium formate based solution called ProPhorce™ AC 299 with a long track record of success all over the world. The product is a free flowing non-corrosive powder that is easy to apply in feed or premix.

Conclusion
Optimizing dEB in feed, especially during periods of heat stress, can have significantly positive effects on animal performance. However, when balancing dEB, the choice of sodium source may affect other performance enhancers as well as total feed cost. While sodium bicarbonate has the potential to increase gastric pH and neutralize a substantial part of the gastric acid or any added feed acidifier, sodium formate maintains gastric pH and may further potentiate the acidifier effects.

• Optimizing dEB is one of the cheapest and best tools to relive consequences of heat stress.
• A chosen dEB enhancer should not have adverse effects.
• Consider the total feed cost, not only the cost of the dEB enhancer.
• Sodium formate maintains gastric pH and provides antimicrobial effects.