Feed and Food: A farmer’s perspective
We spoke to Gary Anderson, a pig farmer in Northern Ireland, to get insights into what benefits Perstorp feed additives provide on a daily basis out in the field.

Hi Gary, can you tell us about your background?

“I studied farming at college back in 1985, and have been working as a farmer ever since. Together with my father we run two sites in Northern Ireland, both of which are pig farms.”

What things have had the biggest impact over the years, in your experience?

“Well, a lot has happened in farming in Northern Ireland. In 1998 there was a fire at one of the major processing plants, which took out about half of the slaughteringcapacity in the region. That meant that there was a massive oversupply of slaughter pigs in the market, and this made the price much lower for a long period. Pig farmers couldn’t make enough to cover the costs of feed for the pigs. Debts spiraled, and that drove many out of business, and it took a long time for the area to recover.”

“It meant there was a big nationalization of the pig industry. About 60% of the farmers went out of business losing about 45% of sow numbers. This meant there was only one large processer and one small processor, and we also had the disadvantage of live shipping costs over to England to access our market. To make enough, you had to run a very efficient, tight ship at that time. It was a very stressful hard time. That’s the one thing that really sticks out as having a noticeable impact on what we do here.”


Has it stabilized now?

“Now we’re back to normal yes, and back to the normal pig price cycles. We have a shorter boom and bust cycle though, at about three years, where it used to be five. This is mainly down to the fact that everything’s done on an international basis, so prices react so quickly.” 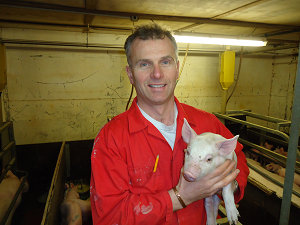 Talking more specifically, how do you consider gut health when it comes to feeding your livestock, and what effect does that have on your farms?
“There seems to be a link between gut health and the overall health of the animal. If gut health is poor, they’re more prone to other diseases too. Now we try to develop the gut a little earlier in the lifecycle of the pig and work hard at optimizing feed intake both pre- and post-weaning.”


“This is done through specialist gut health products, including acids as well as medium and long chain fatty acids. If we keep the gut healthy, it reduces pathogens passed on through weaning, which means the guts of the young pigs are healthier too. This can stabilize the health of the herd in the long term.”

“We can also improve the palatability, which means the pigs are eating more, which is also a good sign they’re healthy. This then helps with their growth as well.”


What kind of products are you using?

“We buy mixes from a feed manufacturer which include Perstorp products. A lot of it contains medium and long chain fatty acids which go into the feed. We put other acids and additives from Perstorp into the water too, which helps overall with the gut health. A lot of it stabilizes the gut, and putting them in water means that even if the pig is not eating as much after suckling, which can be common, the animal is still getting vital nutrients and acids to help with health and development. We’ve been using Perstorp products for the past year and a half, and have been using acids for around ten years.”


Have you noticed any changes since using them?

“There has been a noticeable improvement in the health, yes. We’ve been able to reduce antibiotics and zinc oxide in the feed, thereby making the feed more palatable and increasing feed intake, which is great, and the herd is generally stable. We’ve found that the excretions of the pigs are generally healthier now too, which is always a good indicator of overall health.”

Do you see any big changes on the horizon?

“The biggest change for us will be the ban of zinc oxide in the feed, which is generally used to reduce post weaning diarrhea. This means there’s going to be more of a focus on farm management, pig husbandry, environment, ventilation, housing, feed management, as well as a sharp focus on water quality. The industry in general will need a greater attention to detail, but many will be doing all the right things already. There are still some things we can do, but generally we’re in a good position.”

Not All Tributyrins Are Equal