When is it best to use, formic acid or sodium formate?

In general, formic acid is widely recognized as a very effective feed acidifier and antimicrobial agent. However, it can be challenging to decide whether to use a formic acid based product like ProPhorce™ AC 600 and Formic Acid 85 %, or a sodium formate based product like ProPhorce™ AC 299. With that in mind we hope to help you in your choice of the right product for your specific circumstances. There are some key differences in the effects different formulations of formic acid will have in the animal. The difference is whether you primary need is gastric acidification, antimicrobial effect or both.

It’s all about the chemistry

Formic acid was one of the first acidifiers to be used in swine and poultry nutrition. The acidification effect of formic acid (HCOOH) is due to the release of the hydrogen atom (H+) from the functional carboxyl group. If a solution has a high concentration of hydrogen ions (H+), it is called acidic and the pH value of the solution is below 7. When the acid has released its H+ it is considered to be dissociated and the remaining part of the formic acid is now a formate ion (HCOO-). As with all organic acids, formic acid is considered to be a weak acid, meaning that not all molecules will release a hydrogen ion in a solution. 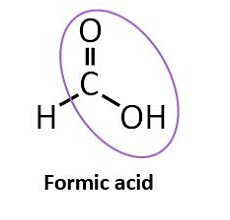 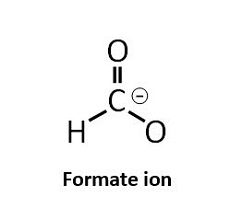 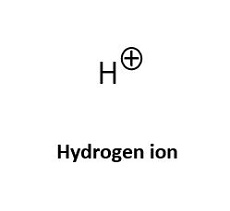 The tendency for the molecule to exist in an associated, neutral form, as formic acid (HCOOH) or dissociated molecules (HCOO- and H+) depends on the surrounding pH value. The specific pH where the ratio between associated and dissociated forms is exactly 1:1 defines the pKa value of the acid. In the case of formic acid this is at a pH of 3.75, which is why it has a pKa of 3.75. In practice this means, that in normal gastric pH, which is often higher than 3.75, the formic acid is prone to release the H+ which acidifies the stomach content. This is why formic acid is considered an acidifier. Conversely, when pH is lower than 3.75 formic acid is prone to stay associated. 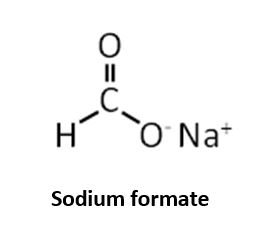 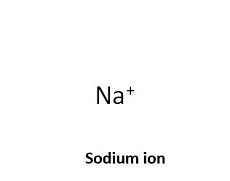 The key difference between sodium formate and formic acid is that, the hydrogen ion of the functional group has been exchanged for a sodium ion (Na+), forming a salt. As sodium formate is very soluble in water it will be rapidly dissolved into sodium (Na+) and formate ions (HCOO-).
In effect, this means that whether you add formic acid or sodium formate, at a pH below 3.75 the majority of the molecule will be available as formic acid (HCOOH). The converse is also true, at pH above 3.75 the majority will be available as formate ion (HCOO-). From the figure below you can see that each unit change in pH relative to pH 3.75 will result in a 10 fold change in molecule concentration.

The acidification effect of formic acid is especially important for young animals. As their own production of gastric acid has not reached maturity, the gastric pH will remain at 4-5 for long periods. The effect of adding formic acid at this pH is that a proportion of the molecules will occur in dissociated form. This will add H+ to the pool of H+ coming from the gastric acid and support the young animal in decreasing gastric pH. This in turn enhances protein degradation as pepsin activity is pH dependent. The larger portion of remaining formic acid remains associated and exerts a defense against pathogenic microbes.

The associated molecules are neutral and therefore able to penetrate the uncharged phospholipid bilayer surrounding the bacteria. Once inside, formic acid molecules dissociate due to a higher surrounding pH, acidifies the internal environment and disrupts bacterial metabolic processes. These internal changes are very energy consuming and stressful for the bacteria which results in reduced multiplication rate or even bacterial death. 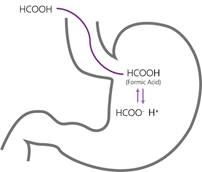 Sodium formate is a salt and does not have any hydrogen ion to release. As such sodium formate does not have the feed acidifying properties as formic acid has. In the stomach of the animal, sodium formate will be dissolved into free sodium and formate ions. The highly available sodium ion will be absorbed in the intestine. However, the negatively charged formate ion will attract a positively charged hydrogen ion (H+) and form formic acid. The hydrogen ion can come from the gastric acid, a feed acidifier or any other source donating hydrogen ions. This process will neither increase nor decrease the gastric pH, but it will increase the pool of formic acid molecules that can be used to reduce pathogenic growth.

Additionally, the inclusion of sodium formate in the feed will provide the animal with sodium which means that sodium formate can be used as a dietary electrolyte balance (dEB) enhancer. Optimizing the dEB value in feed to approximately 240 mEq/kg feed, will contribute to increased growth and feed efficiency in the animal. Some studies have suggested that this may be due to the increased uptake of amino acids as sodium is essential for the absorption of these nutrients. Other dEB enhancers such as sodium bicarbonate neutralize part of the gastric acid and increase the gastric pH.

Do you need a liquid or dry product?

One of the first choices you need to make is whether your production system can handle a liquid based product that often requires specialized equipment to manage its use or if a dry product is better suited to your requirements.
For liquid based solutions formic acid is often a first choice, but it is a corrosive liquid product that is volatile and has a pungent odor. This means that there are special regulations (ADR) when transporting or storing the product. A second generation product such as ProPhorce™ AC 600 reduces these undesired properties through sodium buffering of the formic acid can be used instead. ProPhorce™ AC 600 has the same properties as formic acid, but is significantly less corrosive, less volatile and has less smell. This reduces the risks for personnel, reduce cost of equipment replacement due to corrosion and of course the cost of transportation is also lower.
However not all facilities are able to handle a liquid based solution, in which case formic acid or ProPhorce™ AC 600 can also be sprayed onto a carrier, usually silica. As the silica is only able to absorb up to 55 % of the liquid this needs to be taken into account when considering an option like our product ProPhorce™ AC 105.
Finally, ProPhorce™ AC 299, which is a sodium formate based product is also a dry, none corrosive solution, that can be used as a valuable sodium source, dEB enhancer and as an antimicrobial agent. 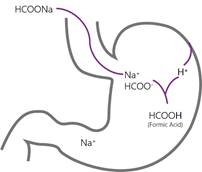