Specialist chemical manufacturer Perstorp has brought a new molecule to market that promises to reduce the incidence of necrotic enteritis in broilers.

Several of the key issues facing European broiler producers today are linked to one key theme – namely, the bird’s gut health, according to Professor Richard Ducatelle of the University of Ghent in Belgium.

Leading among those challenges is gastrointestinal health disease necrotic enteritis (NE). New research offers the prospect of a solution to this economically significant disease in the near future.

Widespread low-level use of antibiotics as growth promoters in broilers are used to mask some of these gut health issues, keeping the birds healthy and productive. Contrary to some predictions, the EU ban on antibiotic growth promoters introduced in 2006 did not end broiler production in the region, but instead drove the introduction of improved feeding, management and hygiene practices, according to Prof Ducatelle. Much of the rest of the world is now considering the same measures, pushed by retailers and food service companies to make similar reductions in antibiotic use, he adds. 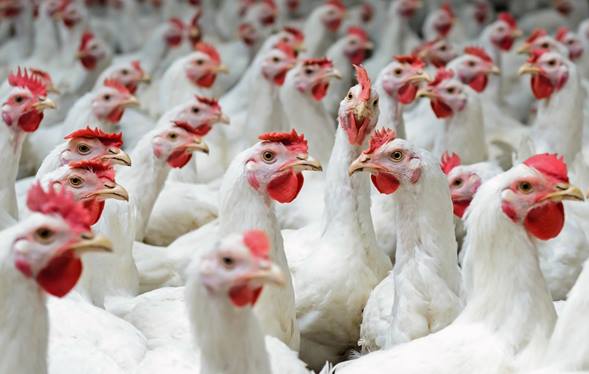 Speaking at the recent European Poultry Nutrition Symposium in Spain, Professor Ducatelle explained that one of the consequences of the European Union banning the use of growth promoters was the emergence of NE.

Caused by Clostridium perfringens, NE is a global poultry health issue, and leads to huge economic losses. Clinical disease brings increased mortality, peaking around 4 weeks of age in broilers, but it is relatively rare.

Much more widespread is subclinical NE, which is not associated with any symptoms. It is easy to overlook, and may not be diagnosed until after slaughter, when characteristic white spots may be seen on the liver. Significant financial losses arise from subclinical NE infections, however. This is explained by lesions in the gut caused by the bacteria. The lesions partially heal after a few days but the damage continues to impair digestion, nutrient absorption and feed conversion for the rest of the growing period of the bird.

Clostridium bacteria are impossible to eradicate completely, and NE may occur in the presence of predisposing conditions, such as coccidiosis infection, feed containing animal proteins (especially fishmeal), high stocking density and suppression of the immune system.

Using a model developed at Ghent University to induce the subclinical disease in birds over the crucial period of 16-24 days of age, Prof Ducatelle and his colleagues tested a new molecule for its efficacy in reducing the gut lesions that lead to economic losses following NE infections. That molecule is represented by valerins, which are esters of the organic acid, valeric acid, and are known as valeric acid glycerides (VAG).

Researchers tested different inclusion levels for VAG, finding that 1.5kg/tonne inclusion was the most effective, as demonstrated by the number of birds with NE lesions in the small intestine, and the severity of those lesions.

“At this VAG level, there was a spectacular reduction in the number of animals with lesions,” said Prof. Ducatelle. “There was also a significant reduction in NE lesion score, meaning that any gut damage was less severe.”

Having established the efficacy of VAG, the Ghent-based researchers undertook a series of experiments to investigate its mode of action against NE.

Like other short-chain fatty acids, valeric acid is present in the lower gastrointestinal tract, and produced by the naturally-occurring microbes in the lower gut, according to Prof Ducatelle. His review of the literature revealed little information about the molecule, apart from its structure that includes five carbon molecules – giving its alternative name of pentanoic acid – and that it is of interest to the biofuels sector. Valeric acid is produced naturally in the gut by Oscillobacter microbes in the caecum, a group related to a better-understood group associated with butyric acid production in the gastrointestinal tract.

In a series of laboratory experiments, it was found that VAG had no direct antibiotic effect on the number of Clostridium bacteria that cause NE, and so the researchers turned to investigating its possible indirect effects of the molecule on the intestinal wall.

They found no effects of VAG on the proteolytic enzyme or alpha toxin activities of Clostridium bacteria.

However, a key factor for the virulence of Clostridium perfringens is the haemolytic activity of a toxin it produces, according to Prof Ducatelle. Known as Net B, the toxin causes the lesions of the gut wall associated with NE. Using a test for this toxin developed in Australia, the Belgian group found a clear correlation between the concentration of VAG and NetB activity of the Clostridium bacteria.

“This result was clearly critical for us,” said Prof Ducatelle. “It helped us to understand the story of its mode of action, as the effect was dose-dependent.”

His team’s further histological studies revealed that VAG had clear beneficial effects on the structure of the intestinal wall, apparently offering protection against the damaging effects of the NetB toxin on the gut surface cells (epithelium) that are important for the absorption of nutrients from the feed.

The small intestine of the chicken is lined with epithelial cells, which are arranged in a series of finger-like projections, named villi, and between the villi are the crypt cells. Together, the cells of the villi and crypt form the surface of the intestine. The larger this surface area, the more nutrients the bird can absorb from the feed it eats. In a healthy gut, cells that develop in the crypt area gradually migrate along the epithelium to form one of the many millions of villi.

NE and other diseases of the intestinal tract lead to damage of the epithelial cells, and to the shortening of the villi. This reduces the surface area for nutrient absorption and thus, the bird grows more slowly and less efficiently.

Looking further into the mechanism of the protection of the intestinal epithelial cells, the Ghent researchers found that VAG increased the number of L-cells in the crypt of the epithelium. These L-cells are important because they produce GLP2, a signalling molecule that helps in the production and differentiation of the cells on the surface of the crypt that form the villi.

Summing up his research on VAG, Prof Ducatelle said that VAG offered partial protection against NE under the challenging conditions provided by his laboratory model. The most important mode of action is through the stimulation of the growth of the all-important villus cells to increase the surface area of the bird’s intestine. VAG also suppresses the expression of the gut-damaging NetB toxin.