20170530 Electrolyte balance choosing the right tool for the job

Recognizing the importance of optimizing the dietary electrolyte balance and choosing the correct tool to achieve balance is key to achieving significant animal performance improvements and profitability.

As the global demand for protein increases, so too do the demands placed on our meat producing animals. Like top tuned athletes that are constantly performing at the edge of their ability these animals are asked to perform at the apex of their genetic and physiological capabilities. It is our job as nutritionists to do what we can to keep them in balance throughout their lives. In the same way that a serious athlete recognizes the importance of managing dietary electrolyte balance (dEB) so too should we see the benefits of managing the dEB of our animals. And yet, while diets are often balanced down to the last kilojoule and individual amino acid percentages, dietary electrolyte balance is seldom, if ever, automatically calculated as part of a formulation optimization result or even part of commonly used nutrient recommendations.

The importance of dEB for performance
Landmark studies by Mongin1 and associates back in the 70’s showed the importance of dEB optimization for poultry and confirmed what nutritionists had observed for a long time – that there is an optimum dEB. For poultry this is at around 240 mEq and subsequent studies2 showed the same to be true for swine. They also showed that on either side of the curve apex one could expect poorer performance as measured by weight gain, feed consumption and feed conversion ratio (FCR). What made Mongin et al.’s studies pivotal was, the fact that as animal nutritionists we finally had a tool with which to calculate dietary electrolyte balance. In its simplest form the dEB is the balance between Na+, K+ and Cl- in the feed and is calculated as follows:

What is interesting is that commonly used nutrient recommendations such as breed manuals or NRC recommendations do not take dEB into account. As such, the dEB calculation for swine could range between 46 mEq to 114 mEq3,4 and for broilers between 106 mEq and 310 mEq5-7 depending on which values you choose amongst the range of acceptable Na+, K+ an Cl- values given by various nutrient guidelines8. Most notably, layer breed nutrient guides lack recommendations given for some of the macro minerals making it impossible to calculate dEB. This information is particularly disconcerting considering that these electrolytes are integrally linked with fluid and acid-base balance in the organism. As such they are part of the most tightly controlled physiological mechanisms in the body. Mechanisms that affect everything from bone density, heart and breathing rate, thirst, to nutrient absorption in the intestine to mention a few. This explains why adjusting dEB by just 100-120 mEq can give performance gains of 4-7% as illustrated by figure 1. This is a significant performance enhancement not easily achieved at such a low cost compared to many feed additives. 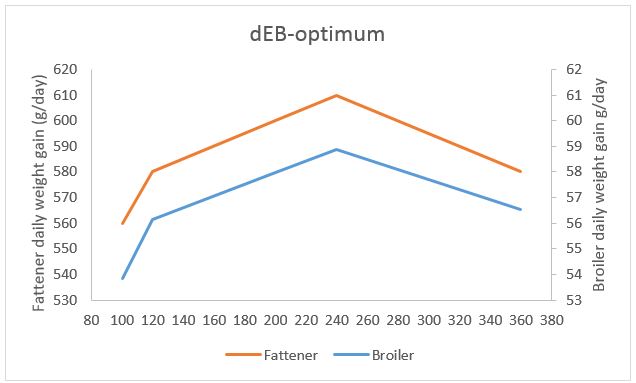 Figure 1: Optimum average daily gain performance is achieved at a dEB of 240 mEq for both broilers and fattening pigs(9,10).

Why use sodium to increase dEB?
The challenge for a nutritionist is to increase the dEB in the most cost efficient way possible. Many try to achieve this by increasing the salt (NaCl) content of the diet, but rapidly reach the limit of what is feasible since Na+ is tied to Cl- in the dEB calculation. It is possible to increase the dEB using potassium sources such as potassium bicarbonate. This solution is not favorable when compared to using sodium to improve dEB. Mainly due to the relatively smaller impact on dEB which means that the costs involved in achieving a similar result are inhibitive. This leaves sodium based products as a first choice for increasing the dEB.

Focusing on sodium also makes sense as it is the most important mineral in the active transport processes of vital nutrients across biological membranes. For example, glucose and amino acid uptake from the intestines is reliant on the active symport transportation of the nutrient and sodium across the luminal membrane of enterocytes. Most likely this important role of sodium in the intestinal absorption of these nutrients contributes to the reported improvement of growth rate and feed conversion ratio when the dietary electrolyte balance was set at +220-+250 mEq/kg in both swine and broiler diets.

Choosing the most beneficial sodium source
A dEB increase is most commonly achieved through the addition of sodium bicarbonate to the diet. While this approach does deliver a source of sodium, it also delivers nutritionally unwanted effects. Particularly undesirable is the buffering capacity of sodium bicarbonate in the stomach which is especially unwelcome in young animals such as weaning piglets whose intestinal tracts are immature.

As is commonly known this buffering effect is caused by the addition sodium bicarbonate to an acidic environment such as the stomach which neutralizes the acid. This in turn increases the gastric pH and releases CO2 and water. It is precisely this effect that is capitalized upon when we use sodium bicarbonate based antacids to get relief from our own heartburn or indigestion symptoms, whose instant relief is usually signaled with a satisfying eructation of CO2 – we burp. However, for our animals this mechanism has a number of negative nutritional implications. Firstly, an increase in pH negatively affects the key proteolytic enzymes. Pepsinogen requires a low gastric pH to convert to pepsin and pepsin in turn has its activity optimum at a pH 2 and ceases to function above pH 6,5. Secondly, any commercial acidifiers added to the diet will effectively be neutralized by up to 30 % by sodium bicarbonate (figure 3). So, while sodium bicarbonate provides sodium, this is either at the cost of added acidifiers, digestive performance or both.

More than just a sodium source
Importantly, the acidifying effect of sodium formate comes from the formate anions, which in a solution will be converted into formic acid effectively increasing total acid content (figure 3). Additionally it is well recognized that formic acid and its salts have a bacteriostatic effect on pathogenic bacteria, such as Salmonella and E. coli. As such, the passage of harmful bacteria into the small intestine is reduced. This effect along with improved feed nutrient absorption leads to an improved gut health and less chance of pathogenic bacterial growth.

Conclusion
There is no doubt that optimizing dEB in monogastric species can have significantly positive effects and give performance improvements of 4-7%. However, when balancing dEB, the choice of sodium source may affect other performance enhancers as well as total feed cost. While sodium bicarbonate has the potential to increase gastric pH and neutralize a substantial part of the gastric acid or any added feed acidifier, ProPhorce™ AC 299 maintains gastric pH and further potentiates the acidifier effects.

References 1-12 available from the author on request.

This article was published by Allaboutfeed.net