CLP (Classification Labeling and Packaging) is a project about re-classification and re-labeling of all chemicals. CLP contains information about the hazards of chemical substances and mixtures and how to inform others about them. The purpose of CLP is to have the same classification for chemicals in all countries. CLP aligns previous EU legislation with the GHS (Globally Harmonized System of Classification and Labeling of Chemicals), a United Nations system to identify hazardous chemicals and to inform users about these hazards. But what does this mean in practice? What changes can we expect and what are the differences and similarities between CLP and GHS and what is the relation with REACH?

First of all: there is a long transitional period. Until 1 June 2015 all preparations can remain labeled according to the Dangerous Substances Directive (DSD). It is also allowed to label according to CLP regulation, but then the DSD classification needs to appear on the Safety Data Sheet of the product. After 1 June 2015 there will be a 2 year transitional period for packed products that are already on the market.

Legislation on classification and labeling
Until now the many different systems for classifying and labeling chemicals have been causing confusion, errors and misunderstandings among workers and consumers alike. This was primarily due to exposure to different forms of labeling and safety data sheets. Therefore, in 2001 the United Nations developed the globally harmonized system for the classification and labeling of chemicals, or ‘GHS’ for short. As an international agreement GHS is not legally binding in Europe. Within the EU the Dangerous Substances Directive 67/548/EEC (DSD) and the Dangerous Preparations Directive 1999/45/EC (DPD) remain active. With the introduction of the CLP regulation (1272/2008 EC), the GHS regulation is officially implemented in the EU as well.

What are the benefits of CLP?
CLP brings a number of benefits:

What is the relationship between CLP and REACH?
The main link between REACH and CLP is that both contain hazard communication tools: labeling rules are set out in CLP whereas the Safety Data Sheet (SDS) rules are set out in REACH. Therefore, they cannot be used in isolation from each other. CLP introduces a number of changes to the SDS’s provisions in REACH. These come into effect over three different timelines between now and 2015. In addition, the notification requirements originally set out in REACH have been moved to CLP.

Terms and pictogram changes
The hazards of chemicals are communicated through standard statements and pictograms on labels and safety data sheets. Numerous terms may change. Examples are: 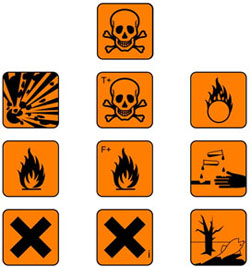 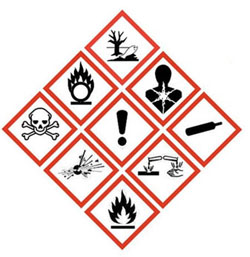