Did you know that Corona means crown in Latin and the virus got this name because it looks a bit like a crown under the microscope? That got us thinking about our molecules. Do they have ‘pet names’ based on what they look like? Turns out some of them do! And some of them simply should. Over the next few weeks we will share a few fun examples with you. First up: Pevalen™.

The molecule of Pevalen™ is officially called Pentaerythritoltetravalerate (or PETV), and it looks like the below picture. What do you see? Most of us see 2 frogs kissing when seen from above. Do you see it? Once seen, this can’t be unseen! 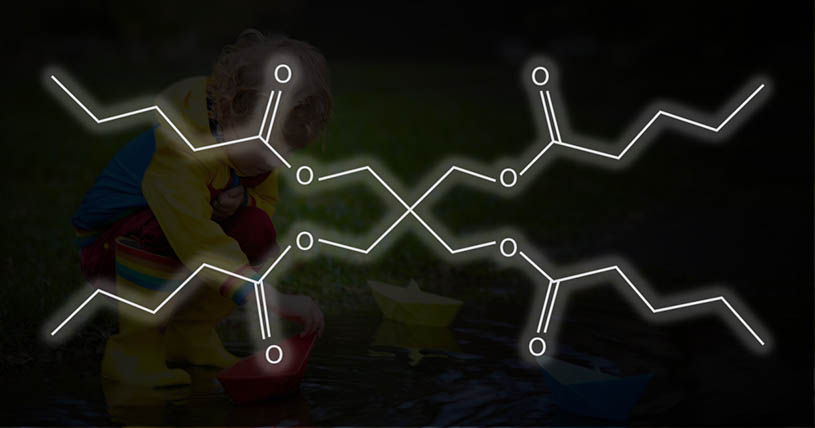 Pevalen is a pentaerythritol tetra valerate, or PETV, which is formed by combining one Pentaerythritol molecule with four valeric acid molecules (hence the word “tetra” before “valeric” in the molecule name). The molecule shape is the same shape mirrored from left to right and up and down. The Pevalen™ molecule falls in the chemical compound group called polyolesters. Esters are formed by a reaction between acids and alcohols. In this case, Pentaerythritol is the alcohol (or polyol) and it’s reacted with valeric acid. Hence the -valerate at the end!

Now why does this molecule do such a good job as a plasticizer? Pevalen™ has a very good UV stability and the reason lies in the chemical structure of the molecule. When using Pevalen™ in a PVC compound, several of our customers have been able to remove UV stabilizing additives from their formulation when they switched to Pevalen™! Pevalen™ is also a very efficient plasticizer and in many cases our customers can reduce the amount of plasticizer in the formulation and increase the amount of carbon neutral fillers which has a positive impact on the total cost of the formulation. Pevalen™ can also improve the efficiency in the production process. One example is the short absorption time. Compared to many other plasticizers, Pevalen™ has a much shorter absorption time which can reduce the blending time in the production line. Also, in terms of gelation temperatures, Pevalen™ stands out compared to many other plasticizers as Pevalen™ reaches the point when the material is solidified at a lower temperature compared to many other plasticizers. This can also give a positive impact on the line speed, or offer the possibility to reduce the temperature which gives energy savings! Other properties that Pevalen™ excels in includes smoke release as the aliphatic structure of the Pevalen™ molecule will contribute to less smoke compared to e.g. DINP and DOTP as an aromatic molecule structure will yield a greater smoke release.

So to summarize, Pevalen™ is not only a phthalate free plasticizer but it also comes with many performance benefits making it a product fit for the future.