Heat stress occurs when birds experience difficulties in achieving a balance between body heat production and body heat loss. This means that birds are not capable of maintaining a constant body temperature without additional efforts. Heat stress interferes with the birds’ comfort and suppresses production. One way to help the birds cope with heat stress is electrolyte supplementation. In Egypt a study carried out by the National Research Center investigated the response of laying hens to different dosages of sodium formate under heat stress conditions. Its findings underlined the benefits of sodium formate in hot weather conditions.

Decreased feed intake in hot weather conditions
While temperature is increasing, egg production, egg weight and feed intake are going down. Feed intake is the most detrimental one (source: Lohmann Management Guide):

To support daily feed intake, measures like improving feed structure, feeding during cooler periods and minimizing heat increment of feeding are necessary. At the same time the daily requirement of minerals and vitamins should be taken into account. The daily intake of vitamins and other micronutrients should remain equal, despite the fact that feed intake decreases.

Electrolyte supplements
Sodium based products are one of the most important supplements under heat stress conditions. When a bird starts to pant in order to lose heat, the additional respiration leads to an increased loss of CO2. The blood acid/base balance is disturbed by hyperventilation and results in respiration alkalosis. During periods of heat stress birds will deplete electrolytes very fast. Therefore, it is a good idea to provide birds with electrolytes (such as sodium) in the drinking water or feed. The use of electrolytes can be used in anticipation of high temperatures.

Trial: sodium formate and layer performance in hot climate conditions
In Egypt a study by the National Research Center investigated the response of laying hens to different dosages of sodium formate under heat stress conditions, and confirmed the benefits.

The trial consisted of a negative control group and 3 treatment groups in which the laying hens received feed with respectively 0,1%, 0,2% and 0,3% sodium formate. The temperature during the trial was 36 °C. A numerical trend in favor of sodium formate was seen in egg weight and feed intake, however there were no significant differences. This is in line with other studies that have shown that feed intake can better be influenced via feed structure and time of feeding in case of heat stress. Egg shell quality parameters were significantly improved by the addition of sodium formate, as well as FCR, egg production percentage, egg mass and plasma levels of Calcium and Phosphorus.

When comparing these egg production results (in hot climate) with the egg production curve (normal climate conditions) provided by the supplier (Lohmann), it is seen that the control group performed clearly below the curve and the 0,2% sodium formate group slightly above curve. 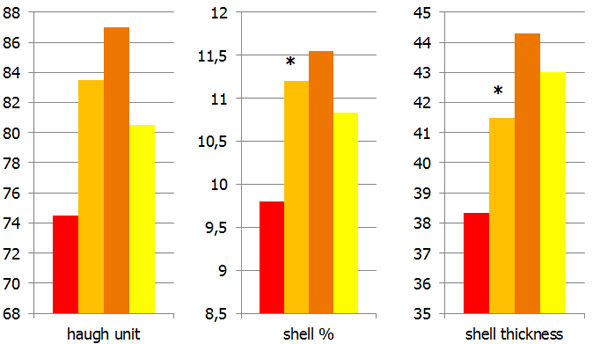 These results indicate that the use of sodium formate (0,2%) contributes to a more durable production of layers when housed in a hot climate. With this trial under these conditions an optimum at 0.2% was determined.