This broiler performance experiment was designed to evaluate the effects of butyric acid in broiler feed during a 42-day pen trial. The hypothesis is that butyric acid, which is an organic acid, increases the biological performance of broiler chickens. In so-doing, we would expect to have a higher Live Body Weight (LBW) of broilers, better Feed Conversion Ratio (FCR) and decreased Mortality Rate. The benefits of butyric acid are well known in the poultry industry. Effects which are attributed to butyrates include:

The trial was conducted at Riche-Bois farm which is situated in the district of Savanne, Mauritius.

For the purpose of this trial, a total of 600 day-old broiler chicks (DOC) (both sex) were collected from the hatchery of New-Grove. The chicks were randomly allocated into 2 treatment groups T1 and T2, having 300 chicks in each group. In T1, the feed contained butyric acid and in T2, no butyric acid was present (negative control). Each treatment had 6 replicates of 50 birds. The broiler breed used was Cobb-500, more precisely the flock number 308C2.

A total of 12 floor-pens (Fig. 1) of equal size were set up in an open-sided house to accommodate the birds for a cycle of 42 days. Each pen contained feeder plates and founts for proper feeding and drinking. Litter of wood shaving materials to a depth of 3 cm was spread on the floor of each pen to maintain a comfortable environment for the birds. Feeder plates and bell drinkers were disinfected before placement of broilers and brooding was done using infra-red lamps. 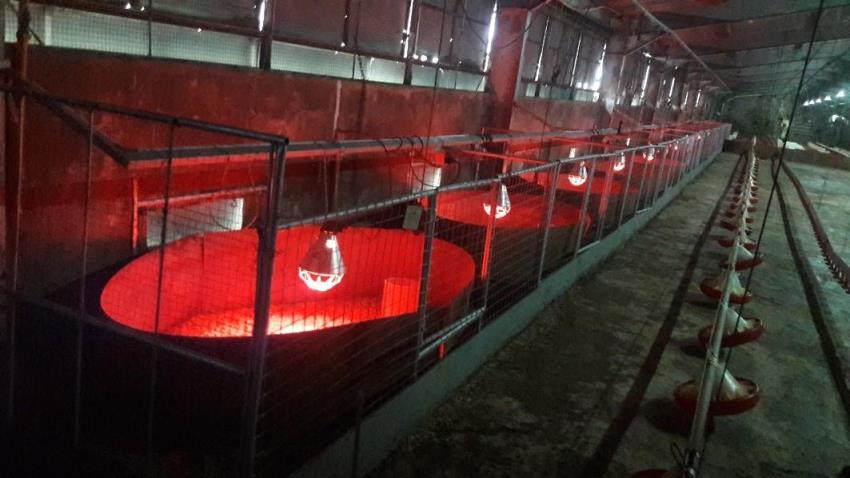 The experimental design followed for this experiment was a completely randomized block design as shown in figure 2.

The feed program used is shown in the table below and the same vaccination program that was already being implemented on the farm was used.

On the day of arrival to the farm, the LBW of the DOC was recorded by weighing the birds individually using an electronic balance. Then 50 birds were allocated in each pen.  Mortality was recorded daily, while body weight and feed intake were recorded on day 5, 7, 10, 15, 21, 28, 35 and 42. Calculations of Mortality Rate, Average Daily Gain (ADG), FCR and FCR corrected for mortality were done on the aforesaid day intervals.

Before the pen trial started, it should be ensured that there was little variance in weight of the DOC in the two treatments. The level of uniformity basically dictates the final result; poor flock uniformity goes hand in hand with delayed growth, rejects, and poor FCR. One way of proceeding was the selection of DOC whose weight was between 43-53 grams. Chicks above 53 grams were included in the trial, but there was very few occurrences of that weight. Another way to analyze variation is by calculating the Coefficient of Variation (CV). The Coefficient of Variation of the day-old chicks were 7.06% and 6.87% respectively for A and B. The lower the CV%, the more uniform and less variable the flock is. 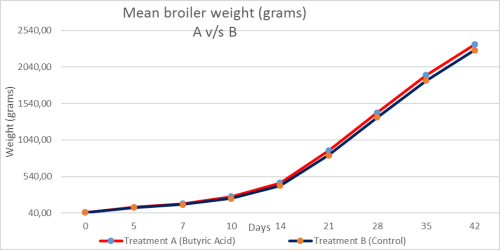 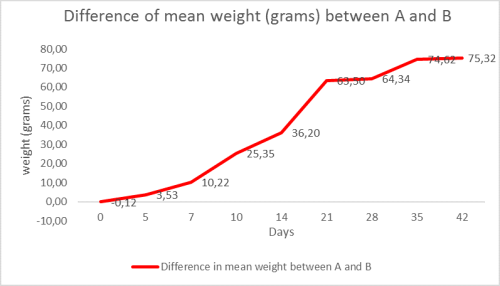 Graph 2. Difference in mean weight of broilers in grams 0-42 days

FCR was influenced by butyric acid all over the cycle, meaning that an improved FCR was obtained in treatment A as compared to treatment B. Significant differences were obtained (P<0.05), which confirms the hypothesis that butyric acid improves the FCR of broiler chickens. 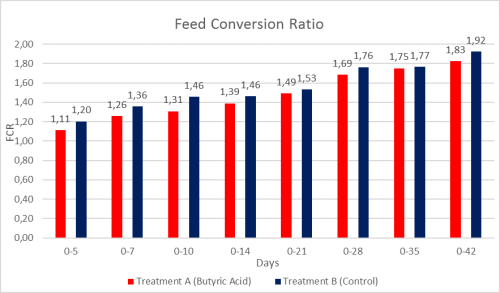 From this pen trial, it has been proven that butyric acid improved the LBW (P<0.05), ADG (P<0.05) the FCR (P<0.05). All the parameters have better final results as compared to the control. These results are in agreement with the results reported by the supplier of the feed additive. Even though histological analysis of the broilers was not performed, from these results we can deduce that there has been an improved digestion and absorption of nutrients, accompanied with a positive effect on the intestinal activity of the intestines.

The cumulative mortality curve below shows the number of birds left for each treatment at specific day intervals of the cycle. The livability of the two treatments during the experimental period at day 42 were 4.67% and 5.00% in treatment A and B respectively. Mortality rate between the two treatments throughout the entire rearing period did not show any significant (P>0.05) difference between the treatment groups.

Post mortum analysis done on the deceased birds revealed that death was caused by flip-over. The livability of the birds was unaffected in the two treatment groups throughout the trial period. Birds of treatment B grew less than in treatment A, even though the livability of these two group of birds were identical during the 42th days of age. Therefore it can be deduced that butyric acid did not affect the bird livability. 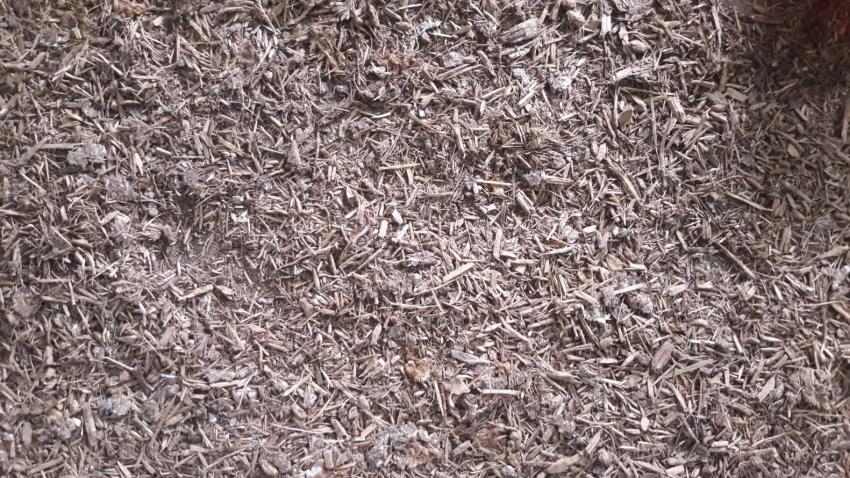 Fig. 3 Litter quality in treatment A 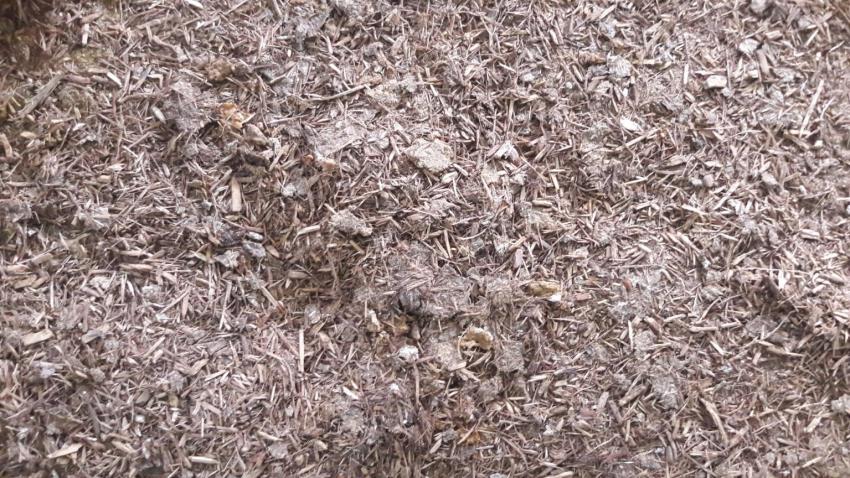 Fig. 4 Litter quality in treatment B

It can be concluded that birds in treatment A supported comparatively better growth responses in terms of body weight, feed efficiency and average daily gain than those of treatment B (control). So, butyric acid may be recommended as a feed additive to increase the performance of broiler chickens.