An increasing number of flexible PVC producers and users are taking advantage of the excellent processability and performance characteristics of Pevalen™, the non-phthalate general-purpose plasticizer from Perstorp for close-to-consumer applications. Now, new research indicates that they may have another reason to choose Pevalen™—for its flame retardant properties.

Researchers at Perstorp recently studied various formulations using Pevalen™ and a competitive plasticizer, DINP. When they compared formulations with the same hardness, they found that formulations based on Pevalen™ had superior performance in smoke release.

Particularly impressive are the gelation characteristics. Because it gels faster at any given temperature compared to other plasticizers, Pevalen™ enables production speeds to be increased and/or energy consumption to be reduced. Processors also benefit from its low viscosity and low volatility. Together, these characteristics provide plastisol producers with increased flexibility in production, better process economics, and improved environmental profiles.

“The results on fire properties are only preliminary, and we need to deepen our investigations before we make any categorical claims,” says Dr. David Bray, Product Manager Plasticizers, at Perstorp. “But we are optimistic that further research will confirm what we have already seen. The findings are especially important, given that many of the applications for PVC plastisols using Pevalen™, such as wall coverings, flooring, cables and coated fabrics, require good flame resistance.”

Pevalen™ already often provides these products with improved durability. Its UV resistance is excellent and it does not contribute to any yellowing. Its fully non-aromatic structure is already appreciated in numerous close-to-consumer applications.

Anders Magnusson, Technical Market Development Manager with Perstorp, will discuss high performance polyolester plasticizers for plastisol on the 5th of April at 15.30 hrs. CET at the PVC Formulation conference organized by Applied Market Information (AMI) in Cologne on April 5-7. 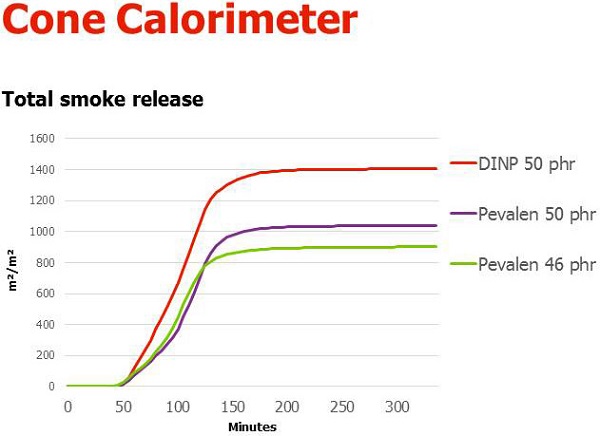